It seems a rich, if not bitter, irony that on the feast of Saint Patrick, the day Ireland pats itself on the back, that its new government should announce a plan to sell off its state assets, the “crown jewels”, as the Irish Independent puts it. Although the Dublin daily doesn’t go into the specifics of what jewels will go under the hammer, a recent report by NCB, an Irish securities firms, suggests that these could be in the areas of energy, ports, forestry, networks. Price tags for these are hard to come by, though it’s been suggested the latter two could go for €1.3bn and €5bn respectively.

One possible way to come up with a total might be to combine the total cut the IMF is supposed to take (€10bn) and the €2bn cut from the proceeds the government wishes to use to “create jobs” in “energy, water and telecom” sector. Ironically enough, these are the same sectors it is thinking to sell off, so the process by which jobs are supposed to be created afterwards is far from clear. Nor is it clear where the government will rustle up the further €5bn to complement its proposed €7bn jobs stimulus programme, as it’s clear, after selling off its forests, ports, gas and electricity companies, there will be nothing left to sell off.

Unemployment in Ireland is nearly 15%, one of the highest rates in Europe. And while any kind of truncated job stimulus programme is to be welcome, coming as it does, as the Independent writes with a note of relief, “with IMF/EU approval”, there still remains the black hole of Ireland’s banks, which with IMF/EU approval, the government is committed to keep feeding. Indeed, Ireland’s new Minister of Finance Michael Noonan, after strangely quipping that he is not “a bookie” (a bookie?) admitted that he “does not know” if the banks would need up to €35 billion in the EU-IMF agreement. Indeed, as the Independent notes, the terms of Ireland’s bailout are such that any “windfalls” – money set aside for the job stimulus? – might have to go into repaying the debt.

All this was churning around my head as I went to the Irish embassy in Paris for the St Patrick’s evening do, in an extraordinary 18th century building with lofty ceilings, heavy green velvet curtains, golden ornamental mouldings, exactly the kind of environment, in this rushed, cramped city, where you have the space, the breadth, the height, to think. Out of a 400 strong gathering, 75% of us must have been Irish, with faces and manners that are distinctively from “back there” – 700 kilometres away. Read full article at Presseurop…
Posted by Gerry Feehily at 6:43 PM 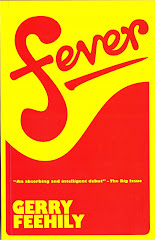 Gerry Feehily
Paris, France
I am a London-born, Ireland-raised author and journalist based in Paris since the nineties. Currently English site editor and blogger at presseurop.eu, I also ply the Ireland desk at Courrier International and am an arts critic on France Culture radio. My articles on literature and politics have appeared in the Guardian, the Independent, New Statesman, Irish Examiner, Spiked, and 3am magazine. Fever, my first novel, was published in November 2007 by Parthian.

Fever's progress in the great book ocean has been slow but steady. The waves are long. Almost a year after publication, it was described by 3am magazine as "a stunning debut novel."

Early 2008, some reviews appeared in the British and Irish press. These rejiggered press releases from the The Irish World and The Western Mail are available on-line. "Traditional Celtic lyricism" - my arse.

There's also this review from Gwales.

Meanwhile, the Big Issue said "an absorbing and intelligent debut" which is nice, and a man from The Irish Independent said - "a punchy first novel." Which echoes the sentiment expressed in the Western Mail's rejiggered press release.

An interview in The Irish Examiner said Fever was "witty" and there was a really good review in Planet International, which I've lost, and oh, in Hot Press the book got mentioned due to my own Goth punk past.

Except for the The Donegal Herald - "A thundering disgrace to his people and the county that reared him. Mr. Feehily (or should one rather say Monsieur?) would do well to mind his filthy mouth. Donegal is well rid of him and his fancy French ways." It said.

That last quote is made up but sure what the hell.

A Spanish translation - Fiebre - was published in September 2009 by El Tercer Nombre, Madrid.